Looking for something, are we?

Sometimes a neon light night will do

And mirrors begin to lie

And the ears miss the ring of claps around

And each makes obscures one beneath

When the music demands dance

And a scream is hard to find

A carnival of cheap thrills and sounds

Those neon lights will do.

I will not pretend to comprehend fully, for this will require many a moon to contemplate.

But yet again, Gurudev, you have reached out and touched this brow lovingly and imparted sagely wisdom.

And for all you have given with a free heart, I remain in your debt.

A meagre thank you is all this mendicant can muster, for garrulity shall not be my wont. 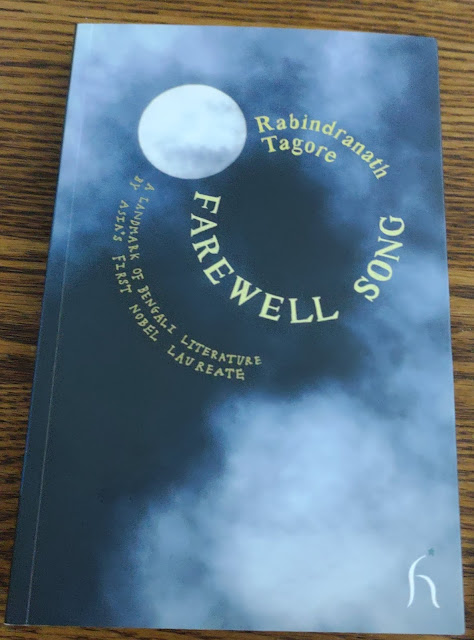 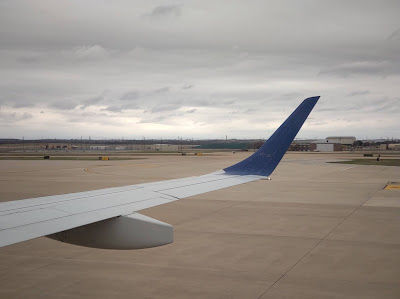 Its been a long 400 days since that last flight. 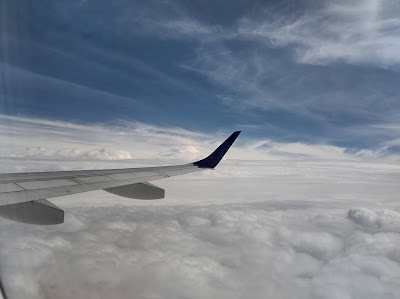 Amidst the spiraling death count and subterfuge of social distancing, an imposed isolation takes its toll. 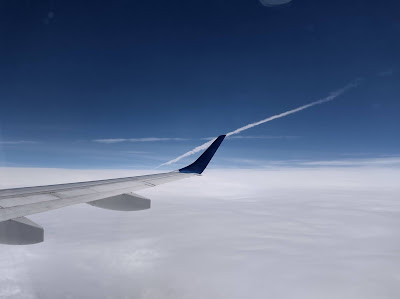 The human muscle was atrophied. 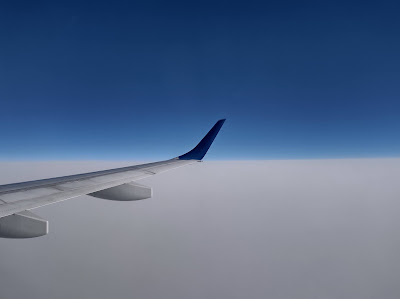 But soaring high above the clouds, all worries were put to rest. 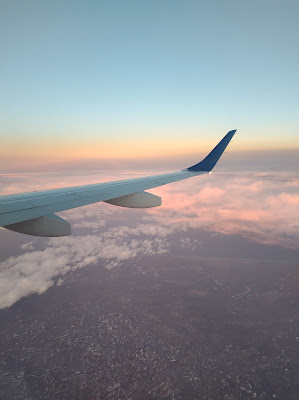 These shades and hues remind of  an anachronistic permanence that 400 days cannot extinguish. 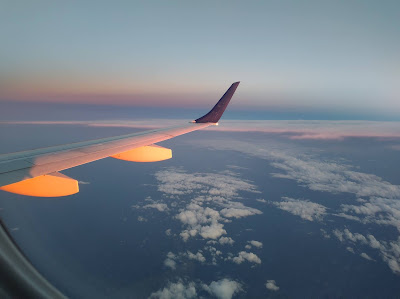 And so, when the plane soars, the gaze lifts, and reminds us of what we are. 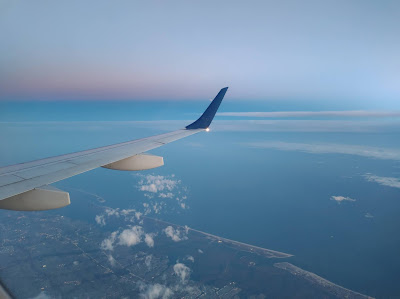 Denying this self worth - by ostracisation,  by law, by conditioning - is often employed to garnish an emaciated entity with a facade of power.

This veneer of monstrosity defines itself insularly and etches away at itself slowly.

As sure as the flowing water will carve out canyons, this visage will depart.

And whence one emerges from this cavern into the full daylight of life, transcendence awaits. For as simple as a breath of fresh air, is the axiom that we are all equal, announces itself.

Under the inky dome, stars wedded to it

My creation takes shape and form

I brought you forth and lived through you

And you became my crutch, night after day

Injecting you into my dreams to sleep with a smile

So shackled this imagination, so pallid its complexion

It aborts any sense of renewal, of vulnerable redemption and meaning

So, burn down what you worship

and worship the immolation, for this fire sustains life

And prepare to toil, to sow, to sculpt.

For the rivers carry a new song, and the sky deem us wondrous

Only if they shelter creations anew.

You were the most perfect car in most respects.  It was a good ride - ruined only very slightly by your creators lack of quality. 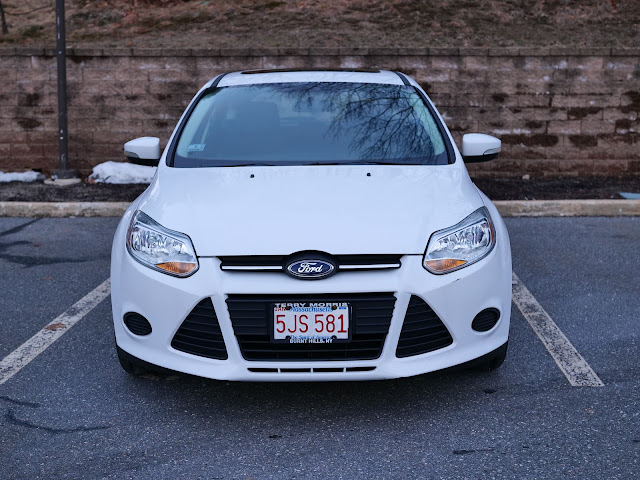 All we can do is predict the storm and prepare for it as best we can.

Mother Nature does her best to love each of her creations.

Not out of malice. Caprice, maybe.

All you can do is accept it.

And when the last snow flake has landed and the winds throaty roar has faded into eerie silence, is a chance for rediscovery.

And Mother Nature allows us to choose the soundtrack.

She did make us predictably stubborn.

They say the arrow of time goes only in one direction. And that the direction is shown by entropy, so says physics.

Physics also describes music as a collection of sounds. A capsule of notes and intervals and pitch and rhythm, if you will.

But how do you go from ingesting this capsule to forming a memory? Where things are clear to the exclusion of all else.

And no one explained how ingesting this capsule makes time travel possible - as you are transported to different sands and smells, in a mere instant.

And no one even mentioned about the tears that now well up and on the brink of rushing down your face.

How could they have missed all this?

Maybe they lived that moment and chose to let us have our own.

Maybe they knew after all and did not have words enough to say it.

Maybe they could say it, but chose to read words of another.

Friedrich Nietzsche wrote: “For nothing is self-sufficient, neither in us ourselves nor in things; and if our soul has trembled with happiness and sounded like a harp string just once, all eternity was needed to produce this one event—and in this single moment of affirmation all eternity was called good, redeemed, justified, and affirmed.”

Maybe nothing more ever needed to be said.

First it hits you. Pierces a dense vacuum.

Then it jerks a solitary tear.

As a nightmare, it haunts you.

Then it builds yearning. A craving desire.

It becomes that next breath - you gasp and choke.

And slowly the vitality is assured.

The paltry apparition of the same struggles against this wind of change.

Burn down what you worship. Worship what you burn down.

Music, this wonderfully weird arrangement of myriad sounds, is entertainment. At least on its shimmering surface.

But as Sisyphus' ordeal describes, we have our own burdens to carry up the mountain. To aid in this endeavor, we each have our own crutches - some find god, some work ceaselessly, some consume drugs, some sulk and some, who have exhausted all of their own resources, choose to not push that boulder anymore. There is solace in the fact that this fickle fabric of space and time that has wrapped each of us in cosmic causality, there are some of us, enough of us, to use music as a crutch to be able to lift each step.

This is not an admission of hardship or a wail against the saints of fate, far from it. This is an admission, if impotent, of the gratitude that this, our tribe, is able to move on, thanks to the propulsive force of this music. To some it is a friend who does not judge. To some, it is a surrogate parent, for when a soothing hand on a fevered brow was needed, but none a warm body found. This is acknowledgement, that we consider ourselves worthy of Mother Nature's blessing to carry on, drawing sustenance from her bosom - where many grew cold by the wayside.

With as much wayward grace as I can purchase, I say thanks. Tomorrow, even if the sounds stop playing out loud, they will remain with us in our hearts, our candles in dark corners. Reminding us, that we can swim in the rivers of nihil and still draw breath.


I, came up with the rants, ramblings, prose and poetry on this blog (unless otherwise mentioned) and hence I prohibit anyone and everyone from using this material elsewhere without me giving you a nod, not that anyone would find anything useful here. Unauthorized reproduction of posts will provoke a whimper, some profanities and a fart. And if there is any monetary benefit involved, do let me know, so that I can modify this statement accordingly for the benefit of all parties involved.Also prolonged exposure to this blog, will result in heightened mental capabilities and increased emotional IQ, which could be harmful to quotidian activities. The author is in no way responsible for people liking you and thinking of you as a decent human being. Now please go back to being completely pointless.